C&C Where should I put the kitchen?

I'm expecting my new 2x4 with 2x2 loft to arrive tomorrow for my newly adopted baby piggies who are about 6 weeks old. I also purchased the cozy kitchen. Should I try to make the loft the kitchen area? I'm guessing its easier to clean, but with the kitchen in there there will only be a 6 inch strip left, and not sure if this is wasting space or now. If I put it on the bottom, should I put it under the loft or in the open area? If it matters, I'll be using fleece flippers for bedding, once they arrive. 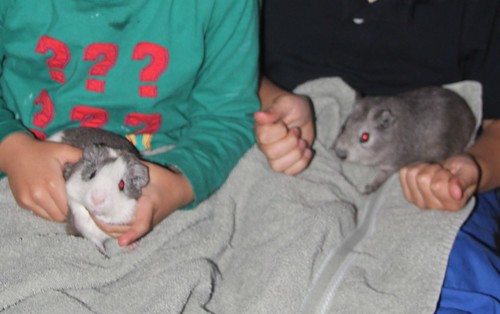 I would put the kitchen in the loft which for me is also the bathroom. Lots of hay up there too. That 6 inches won't really be a waste, think of it as room for foot wiping as they leave and come back down.

The kitchen should definitely be on the loft. The pigs need space to exercise, and if you place the kitchen in the 2x4 area, they won't have sufficient room to run! Remember, the minimum requirements for cage sizes are all on one level. It can't be split into two different levels and considered large enough

spy9doc said:
I don't know who started this and why people keep perpetuating it.
Click to expand...

It's stated here, scroll down to the bottom of the page.

spy9doc said:
I don't know who started this and why people keep perpetuating it. :yawn: Many cavies don't "exercise" and quite frankly, mine get far more exercise with running up and down the ramp than anything else. My kids don't even move around much when placed in a covered run in the yard. They just sit in one place and eat grass and clover. Only the young one has ever run zoomies in the cage.

However, I absolutely agree with putting the kitchen in the loft. I just enlarged my loft to a 2x2 and there is sufficient room to have a large litter box, hay rack, water bottle, pellet dish AND a cardboard hidey. My kids love having an upstairs "apartment" where they can get away from each other. Now there often will be one up, one down much of the time.

After I made the loft large enough for all this (from a 1x2 loft), the downside was that they became too lazy to go up to the litter box and were pooping all over the cage. This was solved by putting a small litter box on the main level. They now use both of them and the cage stays pretty clean.
Click to expand...

When I went from the basic 2x4 to the 2x5 with a kitchen loft and bedroom loft, mine quit using the kitchen for the bathroom. I have redone the cage twice since friday night after work. The 4x3 and loft just did not work and left no room to get around them and was hard to clean. I went back to a 2x5 with the kitchen down on the main floor because mine really do not zoom around much at all. It has a low divider so they can use that area to zoom in. I put both litter boxes in the main area but I am going to steal your idea and move one up stairs which is where I moved their bedroom/piggy patio to. I hope it works because before I ever redid their cage they very rarely used anywhere but the kitchen.

spy9doc said:
I know where it is.......I was being vague on purpose. Just because it's "there" doesn't make it absolute gospel. Lissie, you know that one can't apply a so-called guideline in every case of cavy ownership. Guidelines are wonderful for the uninitiated, but one should also use critical thinking skills.
Click to expand...

It's written by [MENTION=1]CavySpirit[/MENTION]. While lofts may add fun things to do in the cage. The main level itself should still meet the minimum space. Newbies reading your post may think it's okay to build multiple levels of 1x2, which is not okay.
You must log in or register to reply here.

Where Should I Put The Doors?

where should i put my cage??

Cage Where should I put the guinea pig cage?

Where should I put a water bottle??

C&C What should I use for the kitchen.