Tell us about your other pets!

We just lost 3 hermies so right now we don't have any other pets. But we have BIG plans for more next year when we move out of our tiny apartment and into a bigger home. We are getting a chin for my daughter and hamsters for my son. And for mom: a dog!

I've only got two pets besides my piggies, my dog, and an African dwarf frog. My dog is a yellow lab named Jessie. He'll be 6 in October, and he's almost completely blind. He is the laziest lab I have ever met! He'd much rather lay on his bed and and have his head scratched then go on a long walk in the park. He almost never barks, only when he sees someone at the door.
And my frog is the most boring and low maintenance pet ever. His (?) name is Kermit, and he had a friend, Brooke, but she (?) died about a week after I got her. He's so low maintenance, all you have to do is feed him twice a week. His tank probably needs cleaning, but it's such a tiny little tank you barely have to do anything. Although he is very entertaining when he gets his food and he bobs to the surface.

I don't have any good pictures on my computer right now, so I'll try to upload some.

Besides my piggy Felix, I have 2 geckos and 2 dogs.

This is Leonard, my Rhacodactylus Sarasinorum. He weighs 42 grams and is about 9 inches long.

This is Espi, a Rhacodactylus Ciliatus. He is 8 grams and about 5 or 6 inches.

And these are my wonderful Border Collies. Jade is in pink and Kobi is in purple.

meet terry who is a Lhasa Apso that we sort of rescued when my Cousin wanted to give him to a shelter after My cousin got pregnant. He is now 11 years old, turning 12 next month, and we've had him since he was 8 months

This is Jay, who is now 4 years old I believe, which was my sister's but she moved out and left him behind...not that he's TOO upset about that.

This is one of my turtles. I have 2 and have had them since they were the size of my pinky! They should be turning 15 this summer!

Also, While I'm in the Dominican Republic I usually tend to take in some animals, and this is a picture of the most recent stray which my grandfather is now caring for until it gets better. She was abandoned in the street and some kids were running around throwing bricks at stray dogs so we grabbed this baby before anything happened. When she gets bigger and stronger we'll let her go

Everyone knows about Mr. Whistles

I also have Emma the Pug

Feather my old mare. Dutch Thoroughbred X. Shes the been there done that kinda gal. But still acts like a 5 year old:sarcastic

Colty the solid paint gelding. Due to severe arthritis he has been retired. He is currently doing ALOT better on Cosequin.

And last but not least. My spunky crowntail, Spike!

Well, I haven't been around for a while, but I now have 3 boars named Bugsy, Sweetie Pig, and a 5 week old named Elvis. We also have 2 dogs, Ginger and Winston, and a cat named Car (3 little boys named her hehehe).

We are also in the process of getting a Syrian hamster. We haven't gotten it yet because I'm trying to do my research first. I made a lot of mistakes with my pigs when I first started, and I don't want that same thing to happen with the hamster!

Other than my Rhode and Robin, guinea pig sisters with short tortoiseshell fur (black, red, and white), I also have Leo, a golden-brown dwarf hamster.

In the past, I had two red-slider turtles (Active Mighty Torty I and Torty II; I was in Gr 3-4, I believe), some fish, and two hamsters (Blaster I had white-golden fur, and Blaster II had grey-white fur; they were named after the main character of a story I wrote back then). The reason for "I" and "II" for my turtles and hamsters was because "I" passed away and mom got me another one.

Personally, I believe that I have a better naming sense now.

I have 3 adorable cats 2 females a mother and her daughter named Tiger (mom) and Midnight (daughter) and 1 male his name is Porkchop also known as Dusty because he is grey and white. I have 2 goldfish named Fireball and Orange Creme. We also have a pond with 2 koi, 15 shubunkin, 5 snails, and 2 bullfrogs. Last but not least we have a female rabbit named Foxy Tail.

Ithilgil said:
Other than my Rhode and Robin, guinea pig sisters with short tortoiseshell fur (black, red, and white), I also have Leo, a golden-brown dwarf hamster.
Click to expand...

Correction, my cavies seemed to have rosette fur. Their fur in grown in a flower-like pattern. I had thought that was just messy fur, but it wasn't.

I have a dog with the most amazing personality as well as my 2 guinea pigs. Her name (the dog)is Bella she is 3.

The family goldfish passed away last week, just days before confirming that my pig is pregnant. In the past we have had four dogs, Ragtime, Dopey, Corey, and Chester; three cats, Honey, Race, and Tiger; several fish, including Flotsam, Jetsam, Flounder, Zombie, Spot, and Prince; and I personally had three gerbils, Day, Night, and Jason. Now my mom happily tells everyone that she has no more pets. "The pig is hers, not mine! I'm done!"

other then my piggies, I have 5 rats. this picture just has Truffle and Rosalie. It's hard to get pictures of all the rats together.

This is Peeta & Primrose. They are lop/lionheads.

This is my first bunny, Alice. She is a lionhead. We are gonna start bonding her with the other bunnies.

We have 2 dogs too. In this picture it's just Spencer. He is a German Short-Haired Pointer. He is about 2 years old we rescued him a year or so ago. We also have Lizzie. She is an Austrailian cattle dog/ Jack russell terrier mix.

Other than my piggies I have 10 other animals. First is Alice. She was my first bunny. She is a lionhead that is very independent. Also it looks like she always has eyeliner one

These guys are Peeta (the black one) & Primrose (the white and black spotted one). They are lop/lionheads. I am planning to start bonding these bunnies with Alice.

These are my rats. There are only 2 in this picture. Their names are Truffle and Rosalie. It's just hard to get pictures with all of the rats sometimes. My other 3 are Bella bear, Bonbon, & Rue.

The other animals I have are 2 dogs. In this picture is Spencer. He is a German Short-Haired Pointer. He is about 2 years old. We've had him since he was 8 months. The other dog I have is a Austrailian Cattle Dog/ Jack Russell terrier mix. Her name is Lizzie.

Your dogs are beautiful

Along with my guinea pig Stan (2 years old), I have a cat named Roma (6 years old). They are both from my local humane society. As you can see, Roma has one bad ear, I think she had a pretty rough life until she came to the shelter and I took her home.

Besides my two guinea girls, Jupi & Boo, I also have two bunnies....

And a Saddlebred mare, Tessie

i have two dogs.
Hooch who is a family dog but is more mine XD

booty who is my mothers dog.

then a Fishy named Steve

and of course my piggies, Nibbler, Riley, and Oliver

Precia said:
Besides my piggy Felix, I have 2 geckos and 2 dogs.
Click to expand...

I'm not a big reptile person but your geckos have amazing eyes!! I love how cool they look!!


We have 2 frogs in addition to our piggies. They're really small, live in a tank and only require to be fed 2x a week. They were an impulse buy for my daughter since my mom kept pressuring me to buy them ("you had a fish, why can't she have frogs?") My daughter calls them frog 1 and frog 2. I named them Polly Wog and Anne Fibian

All the animals here are gorgeous! I particularly like looking at the pets that we're not allowed here in Australia - like hamsters and chinchillas. I'd love to have a hamster, but sadly it's not to be.

As well as our 7 guinea pigs, we also have two rabbits.
This is Dobby:

Dobby came to us late last year as a stray. We found him hopping around our yard, eating dandelions and generally loving life. My partner walked right up to him and just picked him up, with barely a fight. Poor Dobby probably would have been eaten by a dog if we didn't take him in.

About a month ago we adopted a wife bun for Dobby from a rescue. This is Winky: 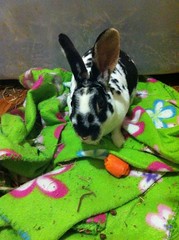 I wouldn't say that Dobby and Winky are quite "bonded" yet, but they don't fight, so hopefully they'll learn to love each other. Winky has problems using the litter tray, so we generally don't allow her to hop around the whole house, just one room. I'm pretty sure it's territorial marking, so hopefully that will die down once she's more used to the environment and her spay has taken its full effect

Here's another photo of Dobby, for good measure:

You must log in or register to reply here.

Tell Me about your Piggies!

Pictures of Your pets (other than gp's)

Veg*n what about your spose/ Significant other?