Spots' Medical Thread, was Piggy of 1 year old biting me

1132 isn't bad. A bit small for my experience, but I've always had big boys. He isn't lethargic, and is eating and drinking normally otherwise? Pooping fine, and no other out of the ordinary behaviour? 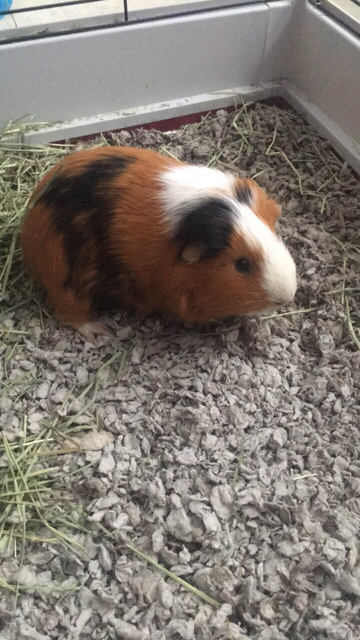 Thats how big he is. He definitely isnt the biggest piggy ive seen but not the smallest. I made a vet appointment for him for Thursday just as a precaution and it'll be his first vet experience. Anything i need to know for the vets? How do i transport him what do i need?

Just out of curiosity, If Spots doesn't get red peppers, how much vitamin C do you give him?

Guinea Pig Papa said:
Just out of curiosity, If Spots doesn't get red peppers, how much vitamin C do you give him?
Click to expand...

Spots would definitely benefit from some extra vitamin C. I'm not saying this is the problem now, but if he doesn't get extra it could lead to other issues.

As for transporting, whenever my boys had to go to the vets I always used a small cat carrier, and the bottom was lined with extra thick soft fleece. I always kept a water bottle and some pellets with me, but I would offer them the water bottle to see if they would drink and offered them a few pellets at a time. The bottles tend to drip constantly and they would trample the pellets everywhere.

Carrots have too much sugar to be fed more than just occasionally. See https://www.guineapigcages.com/forum/threads/105287-How-to-teach-a-guinea-pig-to-eat-vegetables for some help.

Here's some more reading you might find useful: https://www.guineapigcages.com/forum/threads/113176-Information-for-new-guinea-pig-owners

So i haven't been weighing spot enough yet to get the hang of what happens with his weight but today marks 4 weeks in a row that i have weighed him and i don't know if i should be worried about what is happening or if its normal or what could cause the drastic changes over 4 weeks and even week to week. I haven't changed anything in his diet and he is always eating and drinking water.

Those are NOT drastic changes. They're not even measurable changes, and if you're not measuring first thing in the morning before breakfast, you have no idea what he's had to eat or drink before you weighed him.

You need to be concerned about weight losses of an ounce or more -- an ounce is a little over 28 grams.

Those are NOT drastic changes. They're not even measurable changes, and if you're not measuring first thing in the morning before breakfast, you have no idea what he's had to eat or drink before you weighed him.

You need to be concerned about weight losses of an ounce or more -- an ounce is a little over 28 grams.
Click to expand...

Ok thank you so much

Those numbers seem to indicate to me a VERY stable piggie. I'd be very happy with those numbers. I hope that eases your mind somewhat.

That is the closest to what the bug looked like crawling on my piggies cage. Not sure what they could be or if i should be concerned. Recently he has been eating different varieties of vegetable daily and fruit occasionally. He seems to be perfectly normal to me. Checked his butt and back (wasnt too happy with me doing it) and didnt see anything out of the ordinary. Going on vacation for 3 weeks next week and leaving him with my family so hoping that its nothing to worry about for him

So my piggy (spots) turns 3, February 17, i missed a week of a weigh in and last two days i weighed him and he went from a steady weight to losing fast in 2 weeks. If i weigh hik tomorrow and he loses again he is seeing a vet. My question is based on this information how long do i have at best and at worse to see a vet before it might be too late?

How much weight has Spots lost?

Guinea Pig Papa said:
How much weight has Spots lost?
Click to expand... 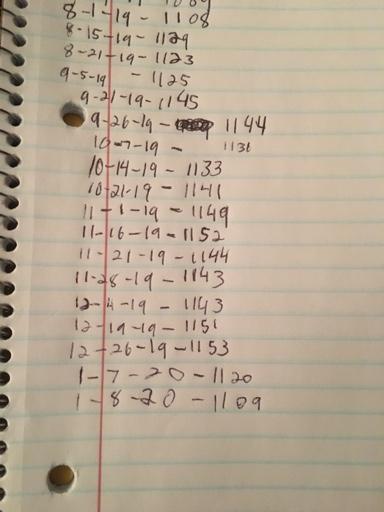 Sent from my iPhone using Tapatalk

So if I read correctly, and those numbers are in grams, hes lost roughly 50 grams since December 26th?

I have to say, those numbers are fairly typical of a stable pig. I wouldn't worry about it at all. If he loses more than 50 grams in a single week I would start to watch. If he lost 80-100 grams in a week I'd get him to a vet.

Guinea Pig Papa said:
So if I read correctly, and those numbers are in grams, hes lost roughly 50 grams since December 26th?
Click to expand...

Yes grams and ya he has. He isn't eating all his vegetables like he was a week ago and doesnt eat as much food either but is still eating and drinking

By all means keep an eye on him if you feel something is off. After all, no one knows your pig better than you. But the numbers I see tell me your pig is very stable.

I’m more concerned about all those little black bugs in your October picture post. Are those completely gone, I hope?

Just a update. I went with my gut and brought him to the vet and they found discharge in his nose so he is getting medicine


Sent from my iPhone using Tapatalk
You must log in or register to reply here.