Is there any mineral oil which is available in India and cure my guinea pig who is having constipation problem. My guinea pig is 2 years 10months old (weigh 900g) . Please reply fast

None of us are in India, so we don't know what mineral oil is available there. But it's a very common item in most places.

But if the poop is clumping, he either has a bacterial/parasitical/fungal problem in his digestive tract, or he's being fed too many vegetables or fruits that don't agree with him.

Pain when pooping is almost always a sign of a bladder stone, not of problems when trying to poop. Has he be x-rayed to see if that's the case?

Today I just gave him lot of grass hay, small cup of pellet and oxbow pellet is not available in my country so it's difficult to buy that so I have a packet which contains mixer of pellets, dry fruits and lot of things in it..I don't know the name but I'll tell u later when I'll find it on internet because I throw that packet away now. We don't have kale, romaine, and my guinea pig hate bell pepper (which is bad bc it contains lot of vit c and low Calcium which is good for him but I don't know why he hates it ;( He just sniff it a little and never looked at that pepper again ) but I do have cauliflower leaves(3 leaves a day), spinach( not much just 3 leaves a day not everyday just twice a week bc it causes bloating), broccoli(three times in a week), carrot (he don't eat that too), cucumber(each day five slice bc he hates to drink water through bottle so balance his water level so I give him cucumber on daily basis), a little cilantro (four times a week), zucchini (every day just 3 slice), lettuce (3 time a week), tomato (daily just small two slice), beans (2 times a week just a small amount bc of calcium level) .
Fruit( all fruits is given once in a week only bc it's not good for guinea pig health) are :- apple (small slice bc it creates soar in gp) , banana , guava (high in vit c), watermelon
Last edited: Oct 5, 2016

He is just not making sound but he breath fast while pooping and I'll send you pic if he do his next poop
Right now he is sleeping. So it's safe to give him cauliflower leave right now bc he desperately want some veggies and I haven't give him any veggies today ..just a lot of grass and cucumber Nd small amount of pellets

I want a picture of the poop, not of him pooping.

We've discussed this before in some of your other posts, but I'll say it again. You need to severely limit the amount of cucumber he's getting. And if his poop is soft, you need to take him off vegetables entirely until it firms up again. He can have hay and pellets, and that's it, until his poop firms up. If it doesn't firm up, then he needs some medication to sort out what's going on in his digestive tract. 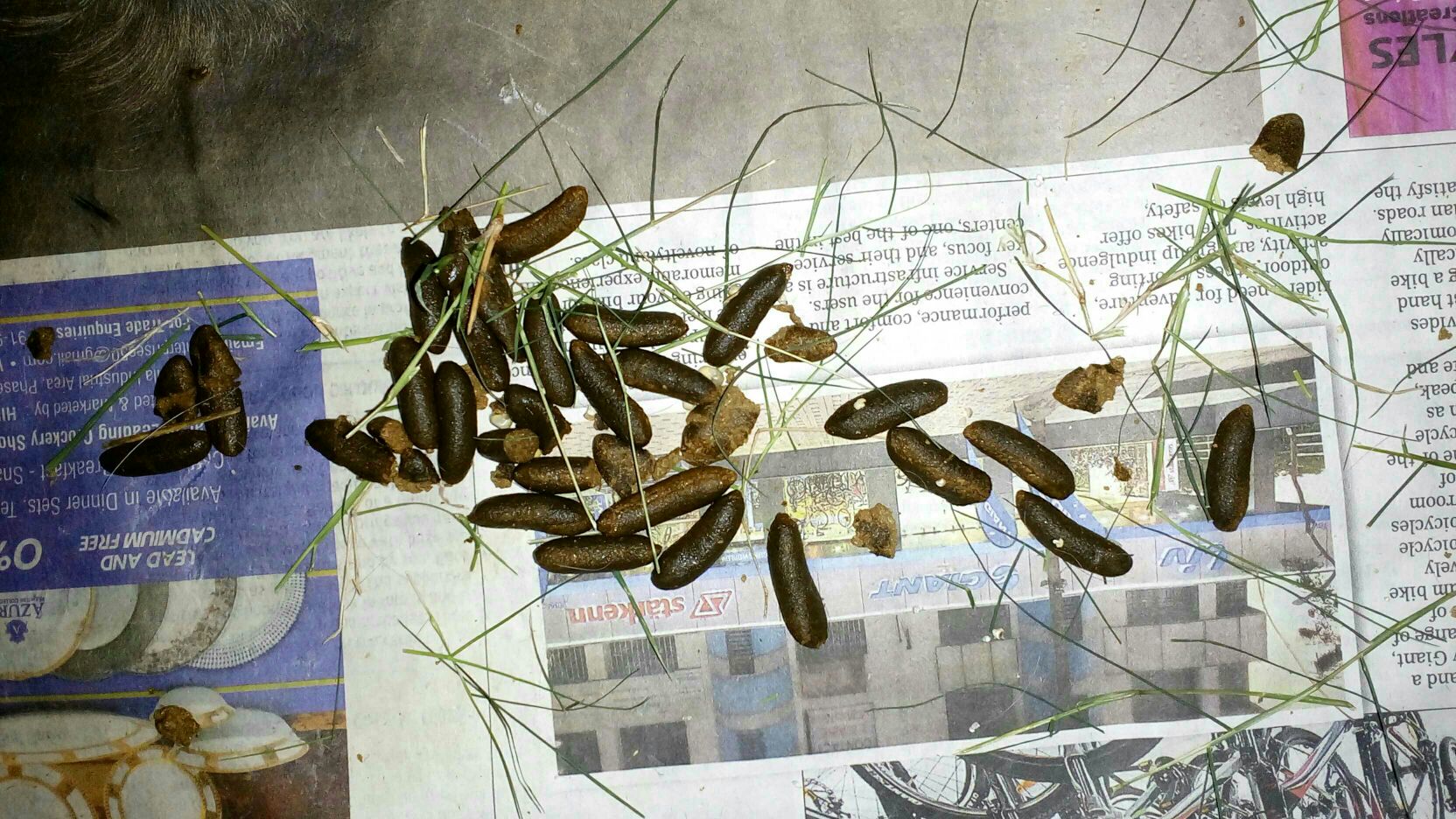 With the exception of those few soft ones, those poops look perfectly normal to me. They're well-formed, and there's no sign of impaction. The soft ones are likely due to the amount of cucumber you've been feeding him. I can't see what you're so worried about.

But, I repeat, if he's hunched up in pain when trying to poop, the cause is almost certainly a bladder stone, and he'll need an x-ray to diagnose that. You also need a better vet. Did you ever call the zoo to ask if they could recommend one?

Okay . I'll see if this is the problem. Sorry but I am over proactive for my guinea pig that's y I keep asking for advice Nd to know more about everything which will be dangerous health for gp. No I didn't contact zoo . I searched it and I found many vet but not specialized with gp but they treat rabbits so there will be no problem . I guess so
You must log in or register to reply here.