Loft or No Loft?

Looking through all of the photo galleries I am always attracted to the lofts. Do lofts make it harder to clean bottom levels? I was trying to make a loft, but am having issues. For starters I can't seem to make an appropriate ramp. And secondly I have a 2x4 with a 2x2 loft (in grids) I cannot reach the back corners under the loft. ( I am on the short side) Is this a common problem, not being able to reach the back corner?

I guess another question is, is a loft worth all of the trouble I'm putting into it? Am I making way harder than it should be? (which I do often)

We had a cage with a 1 x 2 loft (over a 2 x 3 bottom area). I'm around 5' 3" and could not clean the bottom level under the loft. I just couldn't reach. I would have my son do the scooping for me and help me lift the whole cage off the coroplast when it was time to totally change out the cage. My piggie loved the top level and had a lot of fun running up and down the ramp. Now that we have a second piggie and rebuilt the bottom level to be a 2x4, we decided not to add the second level. I know it works for a lot of people but it just seemed harder than I wanted to deal with for me. Who knows what the future holds though.

If you look at my Slash and Burn thread you will see that the front side of my cage is not a full grid in height. I am 5' 9" and I got tired of laying down in the cage to clean it! I just love my new cage and have it down to a complete change in about 20 mins. After all is said and done, I then deal with the laundry.
You can also look at the sticky on adding a second level for help. I actually stand on a step stool for the second level. It is easier on my back. I made a 2x1 loft, and made the mistake of putting the ramp out of the middle of it. That became a real obstacle!

diane said:
And secondly I have a 2x4 with a 2x2 loft (in grids) I cannot reach the back corners under the loft.
Click to expand...

I recently added a 2x2 loft to my 2x4. I was also concerned about reaching under the loft to change bedding, so I decided to incorporate some shelving on the end, and build my loft so that only half of it hangs over the existing cage! I used grids as a base for the entire thing, anyway, and it turned out really well. As soon as Flickr starts working again, I'll upload my photos so you can see!

I used corrugated plastic pipe (drain pipe) for my ramp; Roxy's been the only one to go up, and only once. I bought the 4" diameter, and maybe it's too small. I'm going to work on it this weekend and see if I can't come up with a different ramp.

Re: Loft or No Loft? (pigtures of Roxy/Rosy's cage new loft)

A closeup of the new loft: 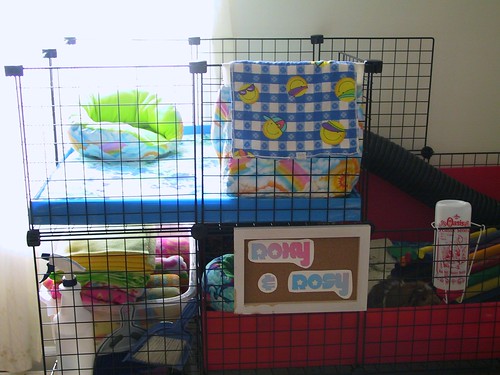 View of the shelves and loft: 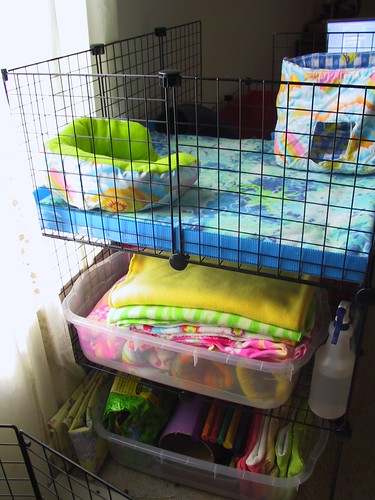 View of the whole cage: 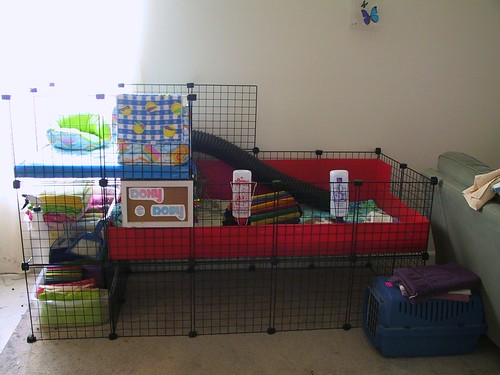 What a great way to use storage! I love your cuddle cup and carebear material!
My ramp is made from grids and it is attached so that you can lift it up like a draw bridge to get it out of the way.

Keep persevering! My piggies LOVE their ramp and loft! (Ramp made from two bent grids, covered with carpet. It is securely fastened to the side - but like the idea jdomans' draw bridge - but then she is awfully clever at things like that!).

My cage is 3 by 4, with a 1 by 4 loft. I am quite tall also - and only really find the far back corner tricky to clean out. As I built mine on the floor - on casters, I just climb in to clean out!

jdomans said:
What a great way to use storage! I love your cuddle cup and carebear material!
My ramp is made from grids and it is attached so that you can lift it up like a draw bridge to get it out of the way.
Click to expand...

Thanks! Actually, I bought the cuddle cup and hay rack from this site: Cage Blankets & Other Small Things. The rainbow fabric is a St. Jude's fundraising fabric, which I'd never heard of! Becky (the lady who made them) used a couple of different prints -- one is a darker blue with animal clouds and bright rainbows, the other is the light blue shown in the pictures.

I tried making my own cuddle cup while I was visiting Mom in June (she has the sewing machine), but had no luck :-( I made a ton of sleep sacks, though!

Dad and I are going to work on the ramp this weekend -- I think we're going to cut the top off the drain pipe, to start, and see if that helps. If not, I certainly have plenty of grids to make a ramp!

As you can see cages with lofts can look really great! (I love your cage aml!) And Jdoman's half grids are really neat. But I too am short (5'4") and just can't reach everything in the cage with the lofts. My boys did love theirs though when they had them. They would tear up and down them.

As for being short and having to clean... I'm only 5'2", and I do okay reaching to the farthest corner. But again, only 1x2 of the loft actually goes over the main part of the cage. I can't imagine trying to reach under a 2x2!

My pigs really like the loft so this works well for me and them.

My lofts were all 1x3 in areas where my cage was a 3xsomething. And they were on cage stands. If I could have straight up 2xsomethings I would have a loft for sure.

My 2nd level or loft is 2x5 and sits almost entirely over the main level. But, it's completely detached from the main level and I can remove it fairly easy to sit it on the floor for cleaning.

My cage is a 2x3 with a 1x2 loft. I have it up on a table so they didn't get so intimidated when the big folk come over. The table is a little taller than I would like so when I need to reach far into the back or on the upper level I use my kids step stool from the bathroom. It gives me just that few extra inches I need to clean. (I am 5'5") I got it from IKEA but I sure you can get a little stool like that anywhere. As well my ramp I can hold up with baby links so that I can clean under it. I think any of the ideas presented here could be useful for you. Now your big problem will be which one to choose!

My cage is on a table, so I have a little chair I stand on to reach them in their loft.

I'm going to get one very soon can you send me some pictures of your cage so i can get an idea of how to design my cage.

Go to the top of the page and click on Photo Galleries, and you'll find more pictures than you could ask for.

I have a 1X2X1 L shaped loft so I can reach the boys, the bottom of their cage is 2x4. For A ramp I have 5 inch corrugated plastic Drain pipe, and they just love it. I use fleece on the bottom and just pull it and all thet goes under it out. On the second story I use carefresh and just lift the tray and dump it.

I had a 1x2 loft over a 2x4 on a table, but it was such a pain. The pigs favourite place to potty was under the ramp, when I would have liked them to go upstairs in the loft, which was filled with Yesterday's News/Carefresh, while the bottom was fleece. I just built an L-shaped 2x6 connected to a 2x2. The 2x2 is filled with YN/Carefresh, and I put their pigloos in there, and it seems to be working out much better. They hang out there most of the time, and go into the fleece covered 2x6 area to run around and popcorn.

The cage is also now on a stand made out of grids instead of a table, and it is much more convenient.
You must log in or register to reply here.

Upper Levels Loft or no loft?!!!

Upper Levels Loft, or no loft ?

Upper Levels Loft or no loft ?

Upper Levels loft or no loft?

C&C Loft or no loft?